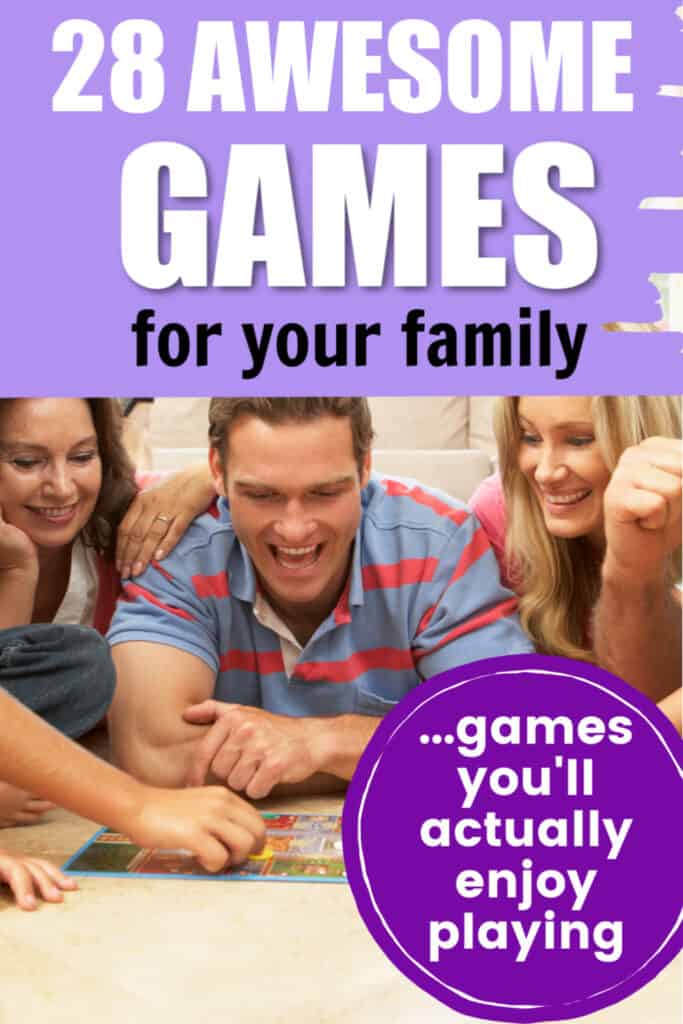 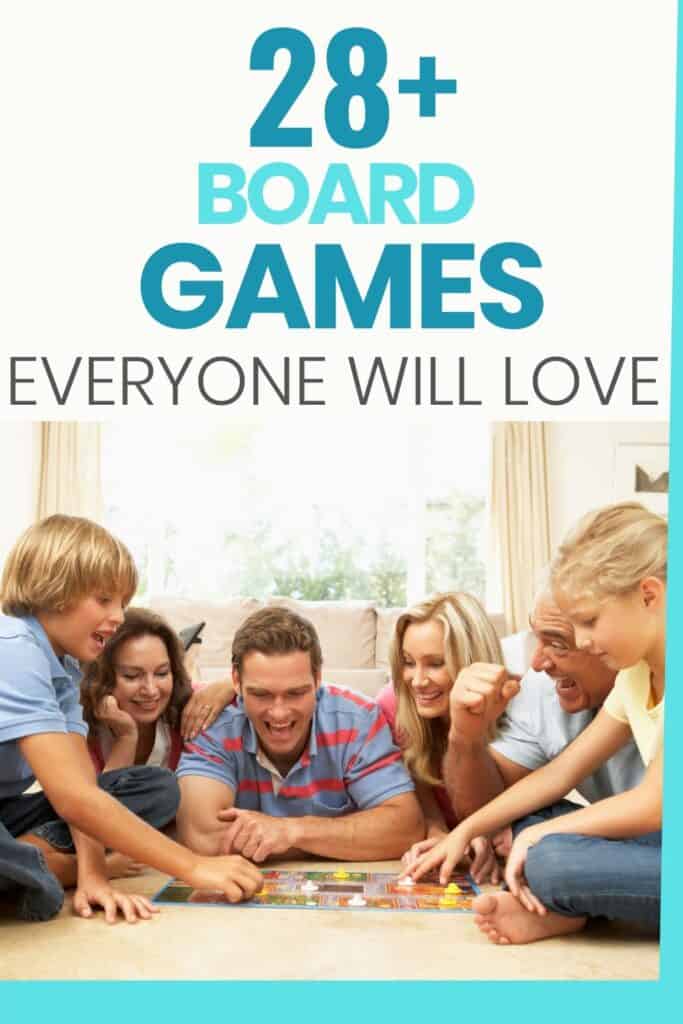 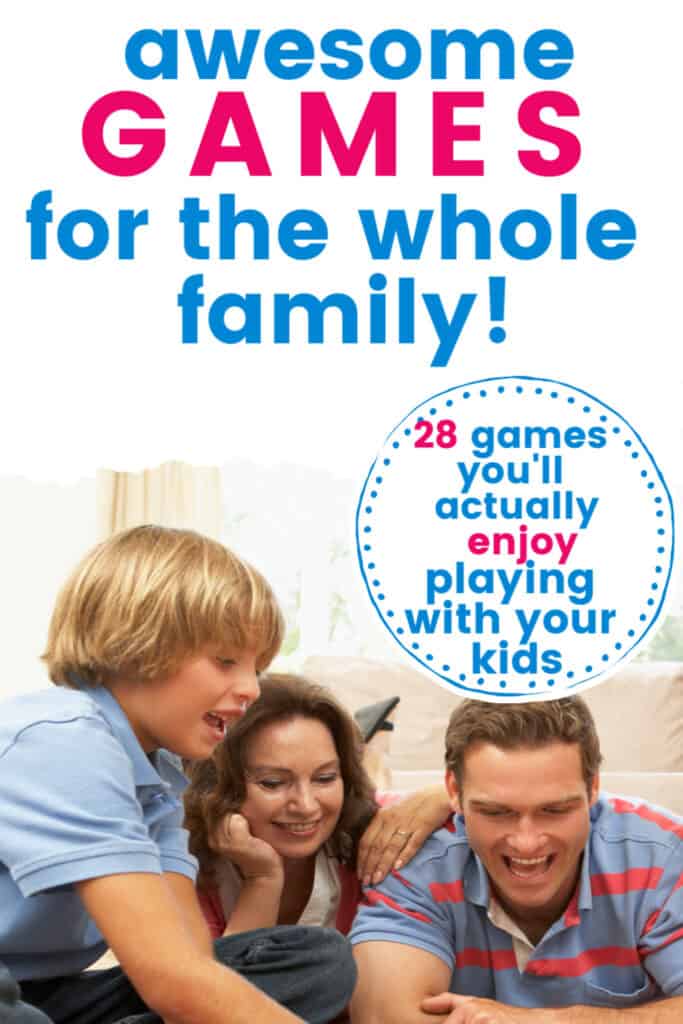 My family has always enjoyed playing games together. But, now that we are spending a lot more time at home we are playing games nearly every day- often several different games a day.

I have to admit that I will rarely play a game I don’t enjoy. I’ve never been a mom that would play endless rounds of Candy Land. In fact, Candy Land didn’t live long at our house, I gave it away so I didn’t have to play it.

I’ve spent a lot of time finding games that my children can play, that I will also enjoy. With so many awesome games available, there is absolutely no reason to play a game you don’t enjoy.

Today I’m excited to share our favorite games that the whole family can enjoy together. I’m listing them by ages- there are some games that will work better for families with older children, while some family games can be enjoyed from 5 or 6 years old. All the games on this list, we all enjoy and play often.

Just because a game is listed at a certain age, doesn’t mean that your family won’t enjoy it if your children are older. I’m just listing them with the youngest age we successfully play the game with.

Everyone in our family loves this fast paced dice game. Roll your dice and choose a number to set aside. Be the first to get all ten of your dice on the same number. The best thing about this game is that any number of people can play. If your family has more than 4 people simply buy an extra pack of Tenzi dice so more people can enjoy the game. With two sets of dice, all 7 of us often play together at my house! You can also grab a pack of Tenzi cards to add even more diversity and fun to this game.

Grab a donut from the bakery by laying the corresponding card from your hand, but watch out! If two people go for the same donut, no one gets it. This game is one of our family’s favorites for when everyone wants to play together. Our six-year-old doesn’t fully understand the strategy involved, but he still enjoys playing by himself. He acts as a sort of “wild card” for the rest of us, since no one can guess which donut he will go for next.

This is a fun family game for risk-takers and safe-players alike. Roll the dice and decide whether to test your luck by rolling again. Your chances of scoring more points is higher the more times you roll, but so is the risk factor.

This game of matching colors and numbers is a crowd pleaser in our house. If our six-year-old picks the game, it will invariably be this one. To take the UNO fun even farther, try UNO Attack.

Try to collect the right combination of desert, appetizers, and sushi rolls to score the most points as the cards are passed around the table. If you have more than five people in your family, check out the expanded version Sushi Go Party which allows up to eight players and offers a variety of game variations.

We added this game to our shelf after playing it with friends, and it has since become one of our favorites. The object is to cross out as many numbers on your score sheet as possible, but the right numbers have to be rolled and you have to guess at the best decisions. This game combines the luck of the dice with simple strategy, so our six-year-old is able to play with a minimal amount of coaching.

Mermaid Beach is a slightly more complex version of the classic game Go-Fish. Try to gather the most shell points by playing matching beach items, mermaids, and special action cards.

In this game, connect the two cities on your railway ticket by collecting the right train cards to lay your trains on the railroad tracks. This is one of those true family games that is easy enough for young children but still fun for older children and adults.

Our six-year-old loves this magical spin on the classic memory. Each match bestows a special power, like a sneak peek at the board or the chance to steal a tile from another player. Once a player has three matching tiles, they get a Gigamon. The first person with three Gigamons wins the game.

This is one of the games we take on nearly every family vacation. The object is simple: don’t explode. If you draw the exploding kitten, diffuse it with a diffuse card from your hand. The Imploding Kittens expansion pack adds another level to the game with a kitten that cannot be diffused and enhanced action cards.

Build your pirate lairs and pirate ships by collecting resources through your earnings and trade. Avoid the Ghost Captain and heed the advice of Coco the parrot to be the first to build seven pirate lairs and win the game.

Try to stash the most garbage in this game of raucous fun. On your turn, roll the die to see if you can grab from the trash pile, throw your trash in the garbage bin, or steal from another player. You can keep rolling as many times as you want, but if you land on the same action twice, your turn is skipped. This game combines simple rules with risk, luck, and strategy, making it a great choice for all ages.

You and your fellow adventurers must hurry to save four mystical treasures from the island’s ancient temples before the island disappears into the sea. This thrilling cooperative game encourages teamwork as players must work together to collect the treasures and escape the island before it’s too late.

Match colors and shapes in this fresh spin on dominoes. The simple rules make this game easy for younger children to learn and enjoy, while the strategy involved provides older children and adults with an exciting challenge. Our family has been playing this game together for over 5 years now, and we still reach for it weekly!

Stake your claim to the most desirable land and build your kingdom in this game of strategy. Since this game does not revolve around secrecy, you can strategize out-loud and give each other advice, making it the perfect game for quality family time. This one is definitely one of my all time favorites. You’ll often find my 16 year old and I playing a round or two while the little kids watch a movie, but we also play it with the younger kids too and have just as much fun.

This is one of our eight-year-old’s favorite games, and one everyone enjoys playing together. In this game, collect adventurer cards to capture magical creatures. Some creatures are harder to capture than others, and each provides a different number of points. Slay the dragons to end the game and see who racked-up the most creature points.

With new cards and new rules, DOS is the sequel to the classic game of UNO. In DOS, you match cards by number or by playing two cards that add up to the right number. Score bonus points for matching color as well as number and be the first to reach two-hundred points to win.

Many a family game night has featured this exhilarating game. The gameplay simply involves pulling out the bricks without knocking the tower over. Actually accomplishing this results in tons of laughter and amusement.

Our eight-year-old loves this game, and it’s fun for the entire family. To win the game, fill your stable with an array of magical unicorns by upgrading your stable, playing magical spells, and attacking your opponents’ stables. We have the Rainbow Apocalypse expansion pack and the Dragons expansion pack which add a mix of new adorable and destructive unicorns and dragons.

This game has been a favorite in our family for years. Use your memory, strategy, and some luck to replace the rats in your row of upside down cards with cats to get the lowest amount of points possible.

The object of this game is to be the first to run out of tiles by building runs of the same color and sets of the same number. In addition to using your own tiles, you can rearrange the tiles already in play. This game provides a fun challenge and is great for encouraging younger children to strategize and think outside of the box.

Move around the mansion and piece the clues together to be the first to solve the mystery. This game is perfect for family game night, and it teaches kids the art of deductive logic as they try to answer the questions of who did it, with what, and where?

Azul is an essential addition to every game collection. The object of the game is to score points over multiple rounds by filling the rows on your board with colorful tiles. It’s a unique game that is laidback but still requires strategy and retains a level of competition.

This game is one of our family’s all-time favorites. The object of the game is to complete the routes on your tickets by laying your trains on the board as you collect the right train cards. We also have the USA 1910 expansion pack which provides a variety of new routes and three alternative game objectives. If you already have the original Ticket to Ride, expand your borders with Ticket to Ride Europe or Ticket to Ride Asia.

This game provides hours of family fun as you compete and barter with one another to build your colonies on the island of Catan. The Catan extension pack adds two more players and eleven pieces of new terrain to the game, as well as more cards and game pieces.

Sequence has long been a family favorite in our house. Teams or individuals race to be the first to create a sequence by playing cards from their hands and placing chips on the board.

Scattergories Categories is a unique spin on the original Scattergories. You start with a prompt (“things that are round”) and must think of items that satisfy the prompt and begin with letters of a given word (like “Circles”) before the timer runs out.

Are you spending a lot of time playing games with your family? What’s your current favorite? 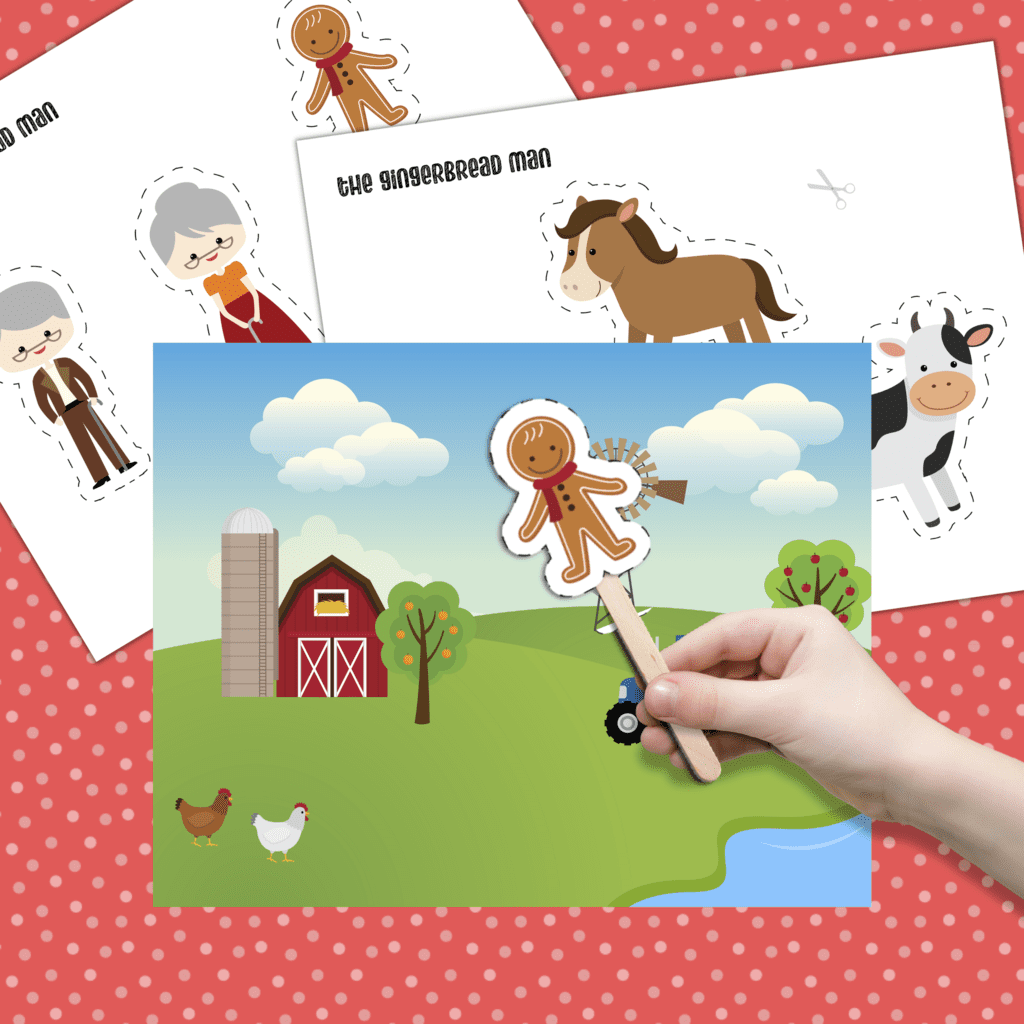 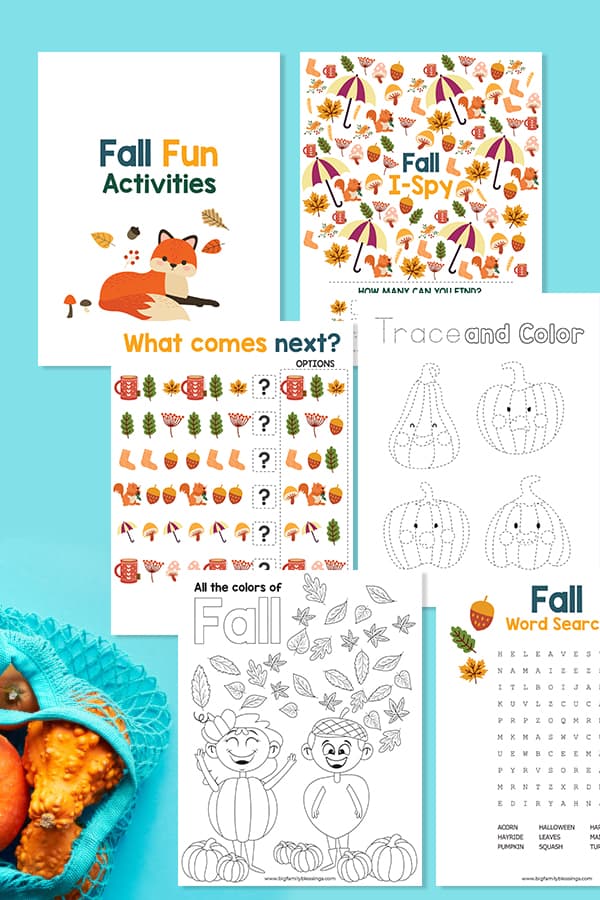 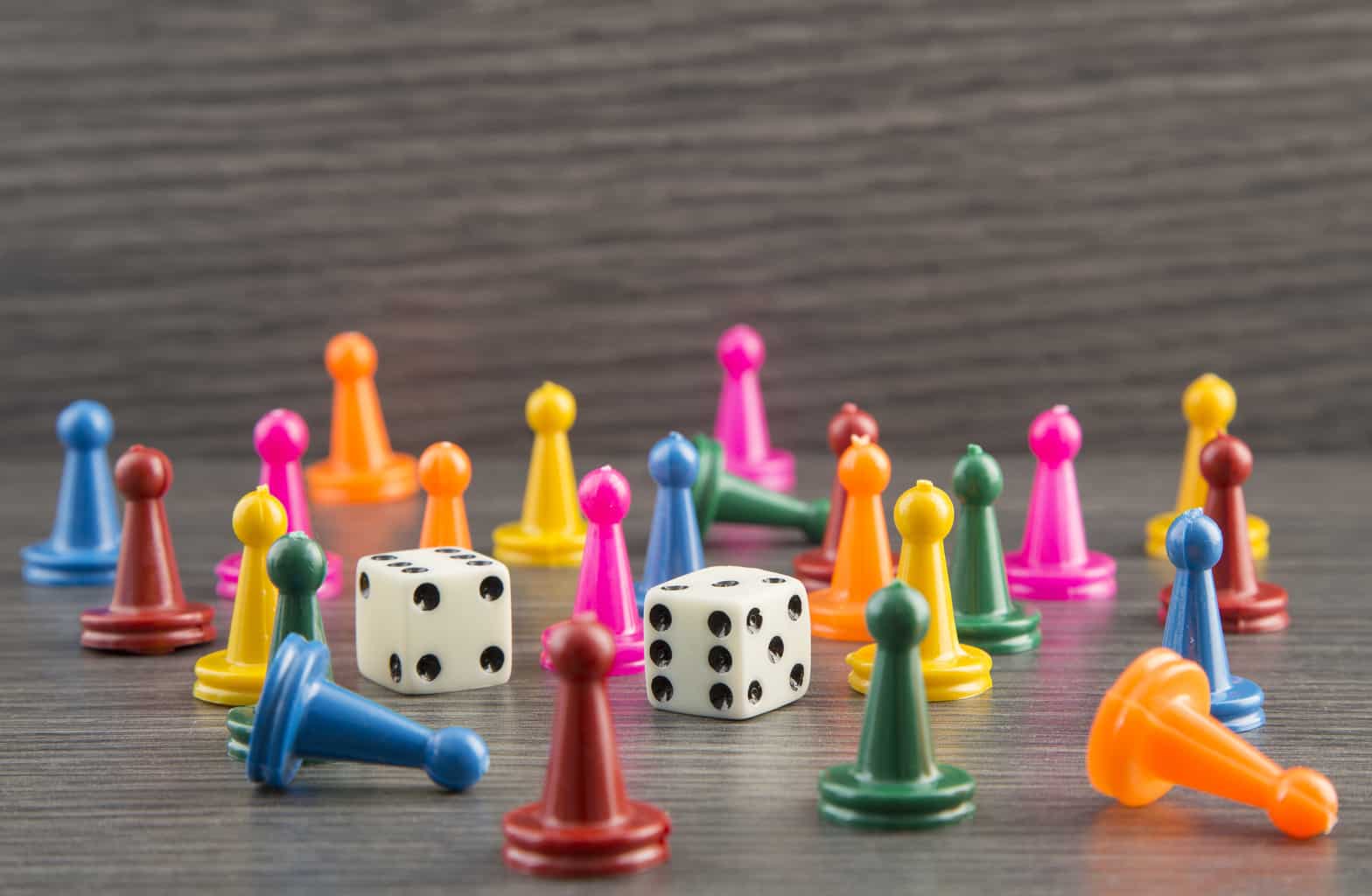 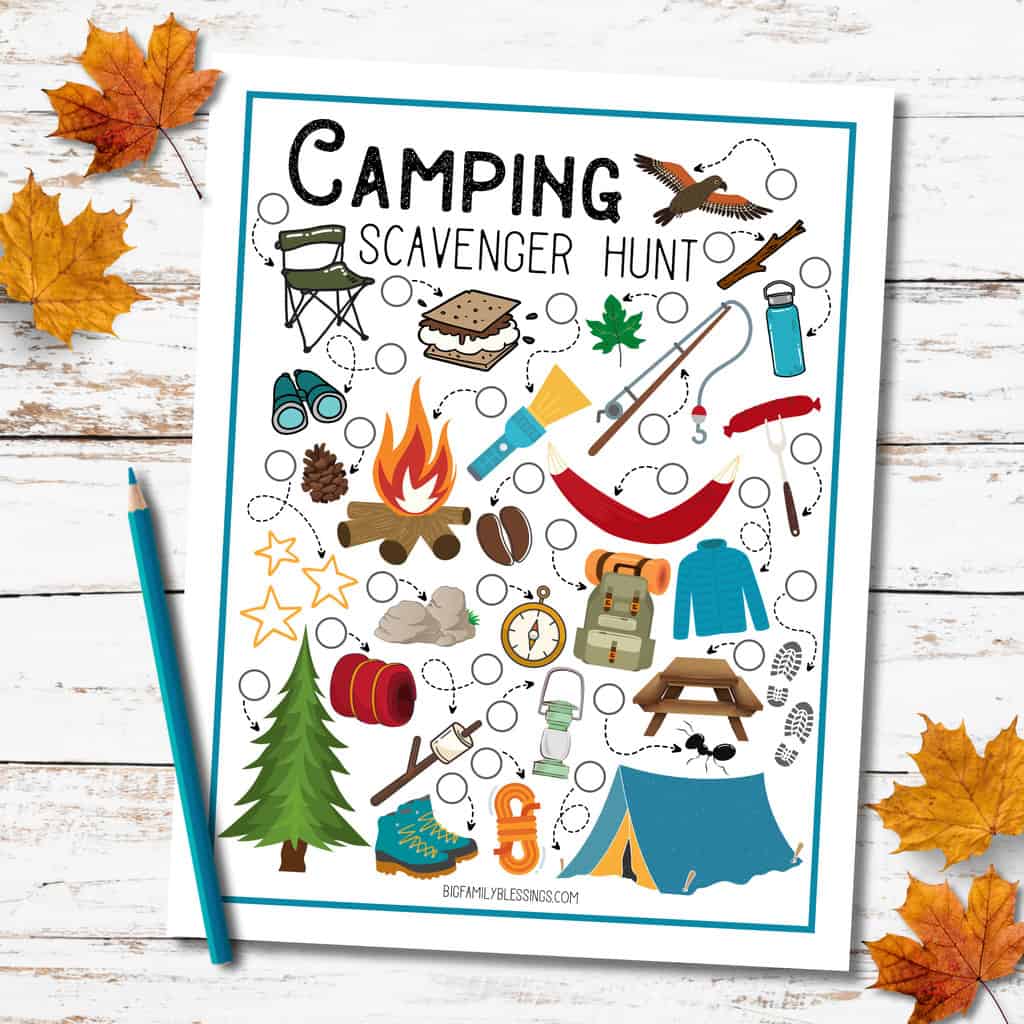 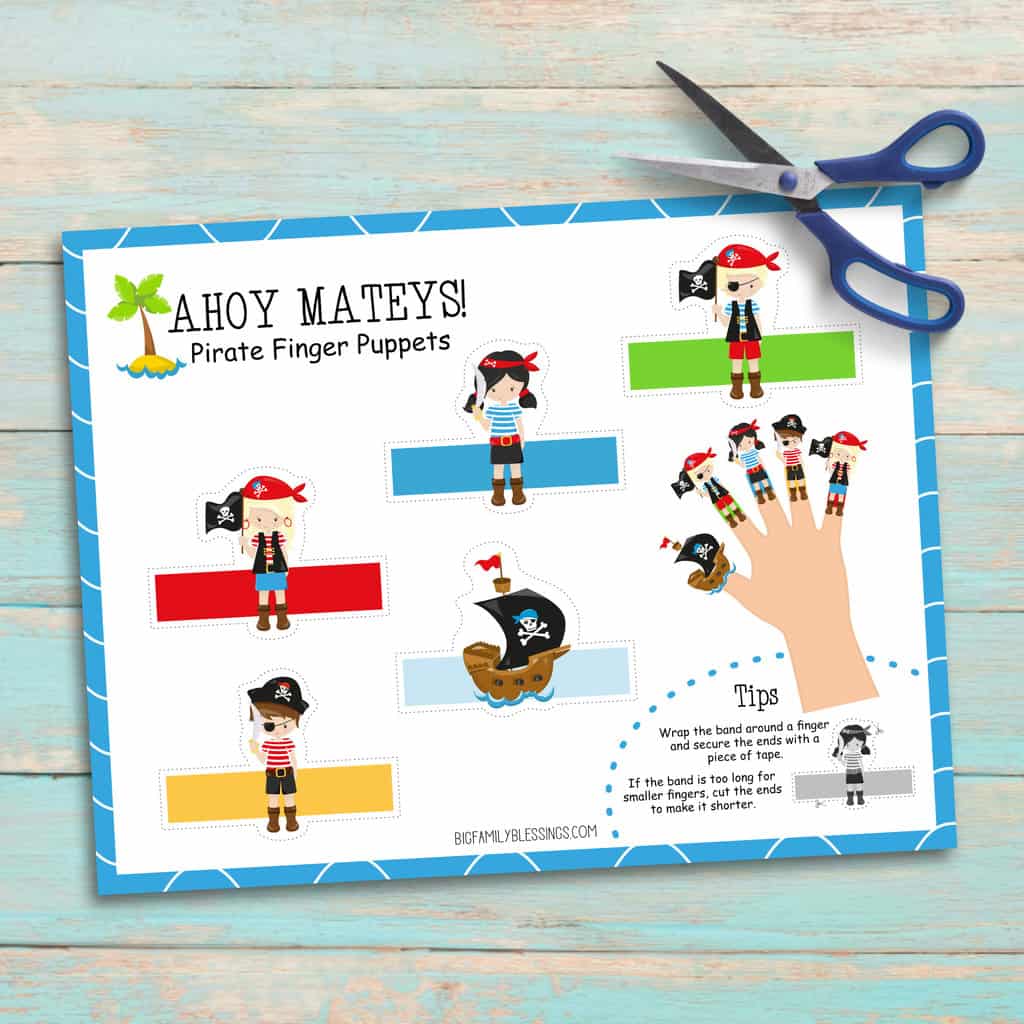 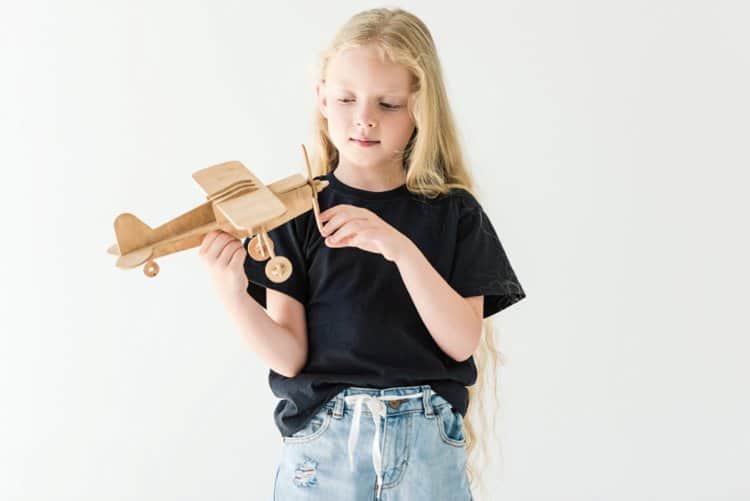