Blue Orange Games already released 10 new games this summer, with more set to release in the near future. I love the quality of Blue Orange Games, and I always know they will be a hit with my whole family.

This month we got to test out two of the newest games, Top That, and Gigamons. While both of these games can be played by children as young as 6 years old, all of my children enjoyed both games, all the way up to 12 years old. 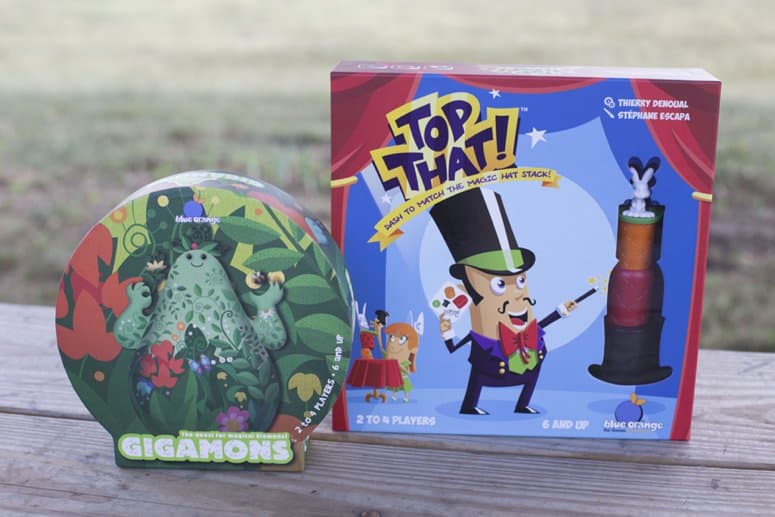 Top That – Dash to Match the Magic Hat Stack 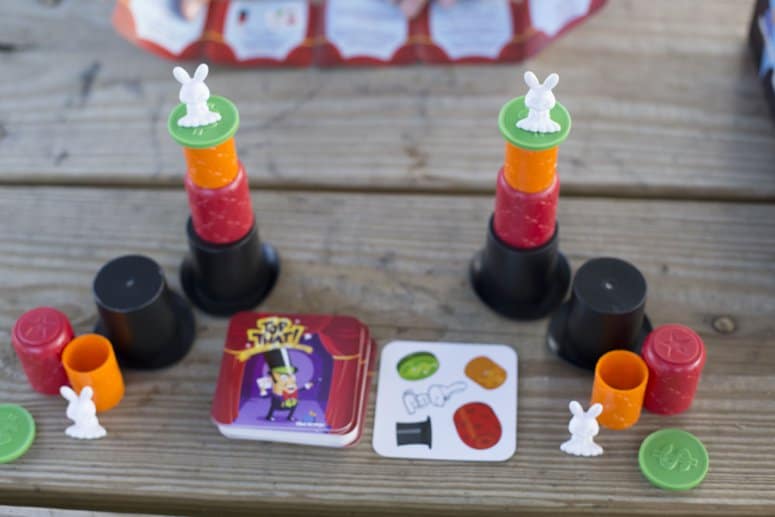 In this game, 2 to 4 players race to match the magic hat stack, and be first to shout “Top That!” Each player receives 5 playing pieces- a black hat, a red cup, an orange tube, a green cube, and a white rabbit. Turn over a card  in the middle of the playing table, and stack your pieces following the 3 rules of the game: items printed in color must be visible on the stack, objects printed in grey must be hidden inside the stack, while object not pictures on the card must not be included in the stack. 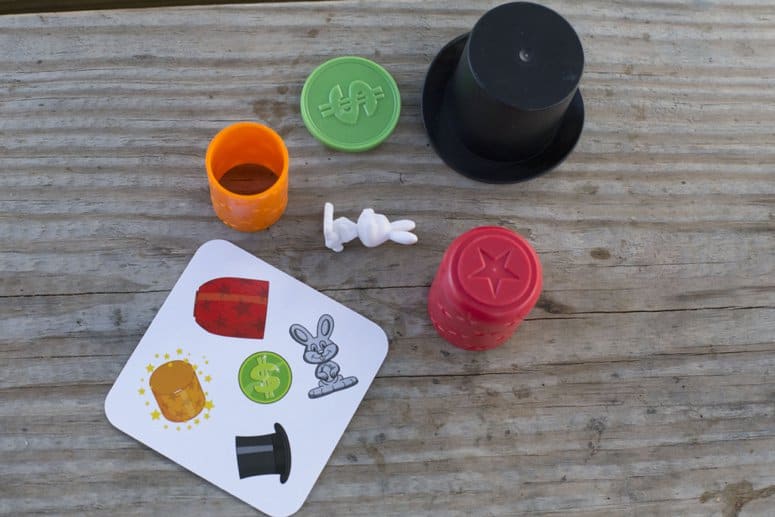 If the first player to shout “Top That!” correctly completed the challenge, he keeps the card as a point. The game ends when the card stack is finished, or when a player reaches an agreed upon number of points. For advanced play objects surrounded by yellow stars on the playing card must be kept empty. 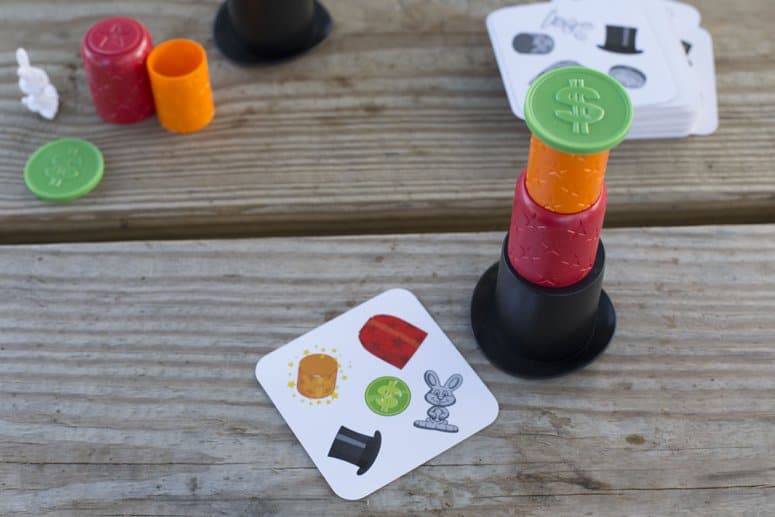 The addition of the advanced play helps older and younger siblings play the game together without the older children having an unfair advantage. 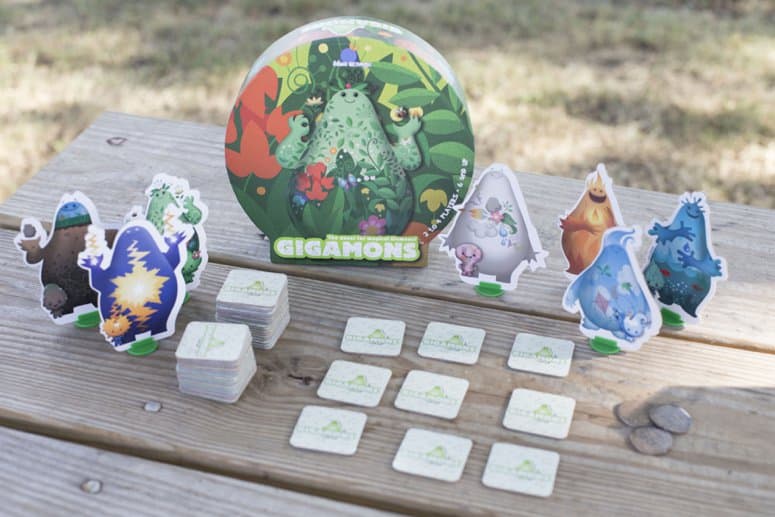 Gigamons is a super charged game of memory, where 2 to 4 players race to be the first to summon 3 Gigamons. This game is the new favorite of my 9-year-old son, he loves to recruit sisters to play with him.

While traditional memory is usually a straight forward game, that easily becomes boring to children and adults, Gigamons adds challenge and a fun story line to keep kids interested. In fact, with the changing memory grid, I had more difficulty keeping the memory aspect of the game straight than my children! I always lose this game when I play against my kids! 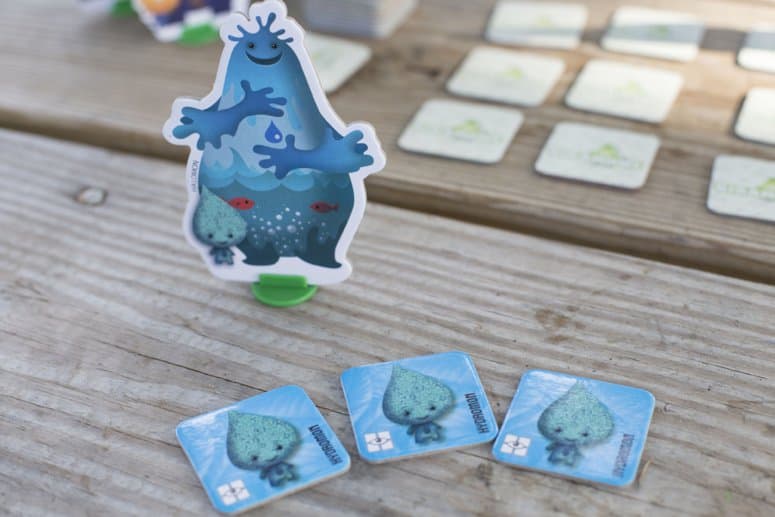 This game has several rules to get straight, but after playing through the game a few times with the rules nearby, it began moving very quickly. To play this game, set up memory cards (called elemon) in a 3 x 3 grid, with extra cards in a draw pile nearby. Players turn the cards over in pairs, much like traditional memory, except in this game each pair has a power. For instance if you turn over two hydromon cards you get a sneak peek at the grid. As you collect pairs, replace the the cards with new cards from the draw pile to keep 9 elemon cards in the grid at all times. The real object to the game is collecting cards from the memory portion to earn the large Gigmon playing pieces. You’ll need 3 matching elemon cards to get a Gigamon and 3 Gigamon to win the game.

My family really enjoys both of these new Blue Orange games, and I’m positive the children in your life will too! How about a chance to win both games?

Thank you to Blue Orange Games for providing these games for review!

Leave a Reply to Amanda B Cancel reply