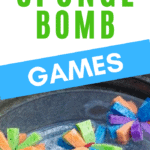 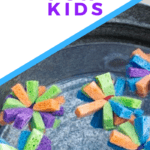 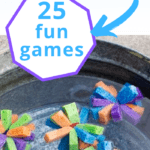 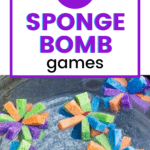 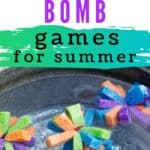 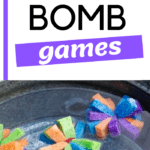 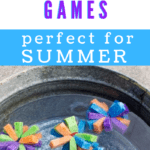 Sponge Bombs are my children’s new favorite water play toy. They are a great cheap and easy project for a fun summer afternoon spent playing sponge bomb games in the backyard!

Sponge Bombs are the new water balloon; all the fun of wet and wild play, without any messy balloons to fill and no tiny pieces to pick up from the yard later. Playing water games with sponges is the perfect way to have fun and stay cool on a hot summer day.

If you want to make a batch of sponge bombs, here is an easy sponge bomb tutorial.

Here are 25 fun sponge bomb games that are sure to be a hit at your next summer party or field day. We like playing these sponge water games with sponge bombs, but you can play any of them with regular sponges.

Which water sponge game will your kids want to play first? 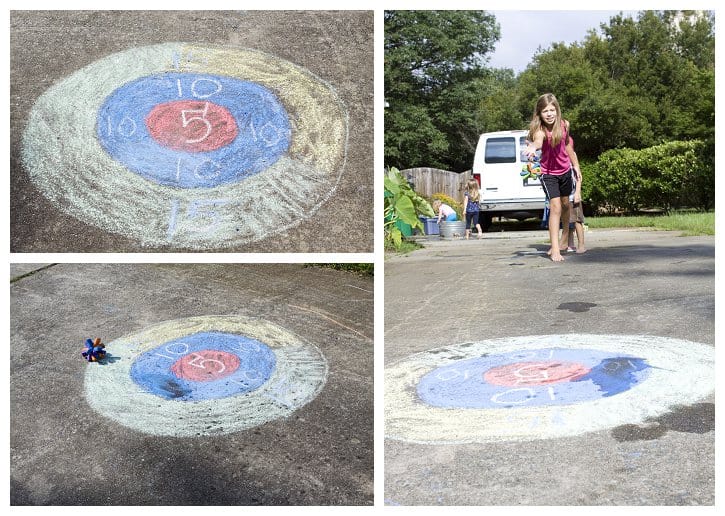 Using chalk, draw a bulls-eye on the ground and label each ring with a point value. Have everyone line up and see who can score the most points with 5 sponge bomb throws.

Two teams line up with an empty bucket at one end of their line and a bucket of water at the other. The child at the front of the line soaks a sponge bomb in the bucket of water and the children pass it down the line from person to person. When the sponge bomb gets to the child at the end, she squeezes it into the empty bucket and then passes the dry sponge back up the line. The first team to fill their bucket is the winner. To make this game harder, have the children spread out so they have to toss the sponge bomb to each other instead of passing it.

Some of the most fun water sponge games are sponge toss games, and this one is sure to get everyone laughing and wet! Everyone stands in a group and all except one child holds a sponge bomb. The children holding the sponge bombs throw them into the air at the same time, and everyone tries to catch one. Whoever does not catch a sponge bomb is out. The remaining players start another round, always making sure there is one less sponge bomb than players. The last person standing is the winner.

Sponge Bomb Monkey in the Middle 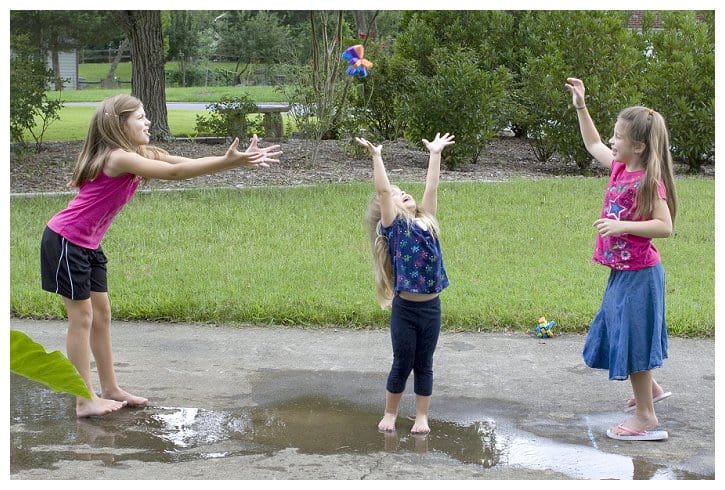 Sponge dodgeball is the ultimate sponge ball game that never fails to entertain. Each team must stay on their side of the playing field as they throw sponge bombs at the other team. If someone is hit, that player is out. If someone catches a sponge bomb, that person gets to bring one of their team’s out players back into the game and the person who threw the sponge bomb is out. When all the players on a team are out, the other team wins.

Float a few frisbees upside-down in a kiddie pool filled with water. Use different colored frisbees and assign each color a point value or label each frisbee with vinyl numbers. Each child takes a turn throwing three sponge bombs to see who can score the most points by landing their sponge bombs in the frisbees.

Relay races are guaranteed to bring fun to any field day or summer party. The children separate into two teams and each team lines up beside a bucket of water. The first child takes a sponge bomb, soaks it with water, and runs to squeeze it in an empty plastic cup a few yards away. Then she runs back and hands the sponge bomb to the next teammate in line who repeats the process. The first team to overflow their plastic cup wins. 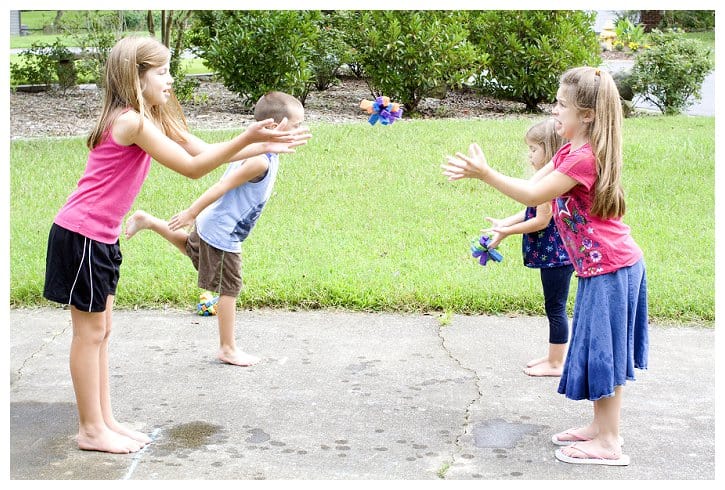 This sponge toss game is always a hit and can be played with a large group or as few as two kids. Teams start close together and one teammate tosses a sponge bomb to the other. If they are successful, the team takes a step farther apart and tosses again. A miss means your team is out of the game. Last team still tossing wins!

In this sponge ball game, two teams of two children stretch a beach towel between them and stand on each side of a volleyball net (you can create a volleyball net by hanging a rope or sheet between two chairs). One team uses their beach towel to catapult a sponge bomb over the net to the other team, who must catch it in their beach towel and launch it back. Each team scores one point when the other team misses the sponge bomb or fails to launch it all the way over the net. The first team to 10 points wins.

Be prepared to get splashed playing this sponge water game! Have the children stand in two lines facing each other and place a bucket or tub of water at each person’s feet. On go, each child tries to throw a sponge bomb into one of the buckets on the opposite side. Each time a child lands a sponge bomb in a bucket they get one point—and get another child soaking wet. They can grab any sponge bombs that were tossed at them and throw it again.

To play this sponge game, everyone sits in a circle except for one child who will be the “it.” The “it” taps the heads of each child in the circle with a wet sponge bomb, saying the word “Duck” each time she taps someone. Eventually, she chooses someone and says, “Splash!” while squeezing the sponge bomb over that person’s head. The person who got splashed chases the other child around the circle. If the child is tagged, she has to be “it” for another round. If she makes it all the way around the circle to the spot where the child she splashed was sitting, she can sit down, and the child who got tagged is the new “it.”

Fill several sand buckets halfway with water and set them up in an inverted triangle. Each row gets assigned a point value. Have the children line up and take turns throwing sponge balls at the buckets of water. The person with the highest number of points after 5 throws wins. 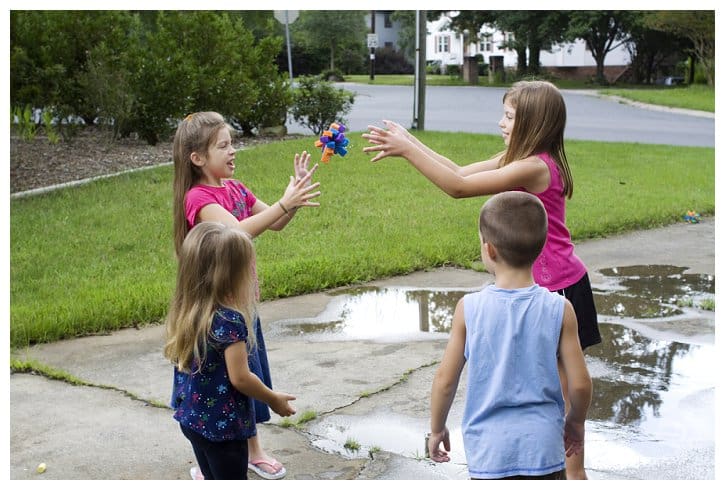 This is one of the best sponge water games for any party or get-together. Play some fun music while all the children stand in a circle and toss a sponge bomb from one person to the next. Randomly stop the music, and whoever is holding the sponge bomb or was the last to touch it is out. Last person standing wins!

This creative sponge game will let your kids be artistic—or just have some fun throwing sponge bombs. Fill several buckets half-way with water and put a few drops of different colored food coloring in each bucket. Your kids can create a watercolor masterpiece by soaking their sponge bombs in the colored water and throwing them at an old spread-out white sheet or a large piece of paper.

This sponge toss game is tons of fun. Have everyone form teams of two with teammates standing close together. The teammate who volunteers to get soaked is the catcher and holds a bucket or large bowl of water. The other teammate is the thrower and tosses a sponge bomb to the catcher. The goal is to catch the sponge bomb in the container of water without dumping it. Each time a sponge bomb is successfully caught, the teammates take a step farther apart and toss again. If they miss or dump all the water out of the container, they are out. Last team standing wins!

In this sponge ball game, the children use tennis rackets to hit a sponge bomb back and forth over a volley ball net (a rope or sheet hung between two chairs can also serve as the net). This can be a collaborative game where two children see how many times they can hit the sponge bomb back and forth without dropping it. Or, this can be a competitive game where two teams of two children see who will be the first to score ten points. Each team wins a point when the other team misses the sponge bomb. 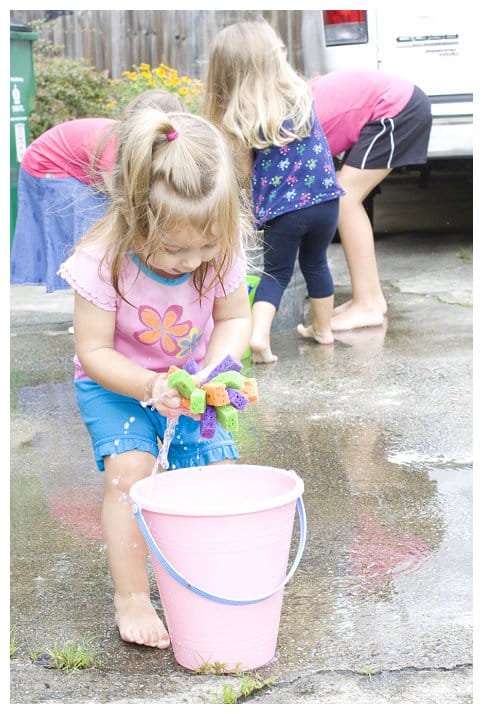 The object of this sponge water game is to move water from one bucket to an empty bucket. Give each child a sponge bomb and separate them into two teams, each with a bucket of water and an empty bucket. When the race begins, the children get their sponge bombs soaking wet and then run to squeeze them in their team’s empty bucket. First team to fill their bucket wins!

Draw a tic-tac-toe board on the ground with chalk and have the children decide who will be X’s and who will be O’s. The children take turns throwing a sponge bomb at the board and using chalk to mark the square where it lands with their symbol (an ‘X’ or an ‘O’). See who will be the first to get three in a row.

Sponge Splash is a fun sponge throw game for a large group of children. Everyone stands in a circle holding a wet sponge bomb. One person stands in the middle and randomly points to someone yelling, “Splish!” The person who was pointed at quickly ducks down, and the two people on either side of her toss their sponge bombs at each other yelling, “Splash!” Whoever was first to yell the word “splash” stays in the game, but the other person is out. If the person in between them did not duck quick enough and got hit by a sponge bomb, she is out. When only two people are left, they stand back to back and the person who was in the middle yells “Splish!” The two players turn around, throw their sponge bombs at each other, and yell “Splash!” First person to say it is the winner and gets to be the person in the middle for the next round. 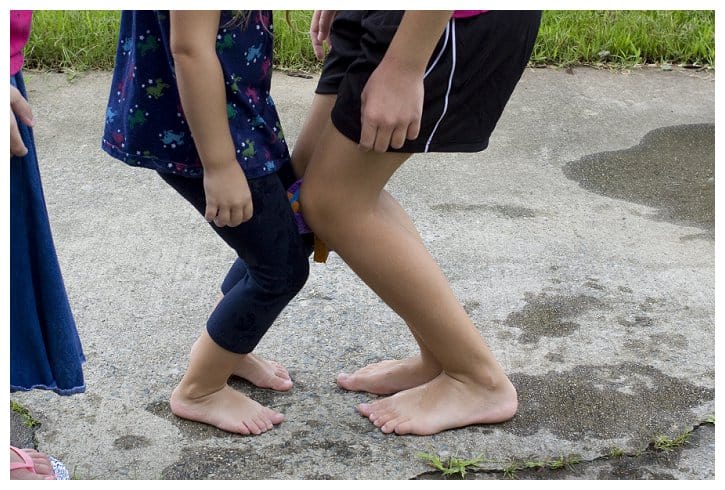 Sponge tag is the ultimate way to play a game of tag. One child is the tagger and tries to tag the other players by throwing a wet sponge bomb at them. When the tagger hits someone with the sponge bomb, that person is the new tagger and another round of sponge tag begins.

This sponge ball game is a lot harder than it sounds and is sure to bring tons of laughter! Create a start and finish line and pair up the children in teams of two. On go, each team races to the finish line by running back-to-back with a sponge bomb between them. If they touch the sponge bomb with their hands or it drops to the ground they have to go back to the start line. The first team to make it across the finish line is the winner!

Head over to MusingsSAHM.com for my guest post tutorial on making Sponge Bombs if you haven’t made any yet.