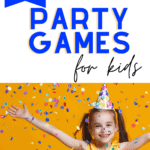 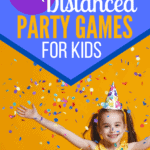 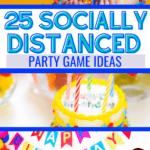 Celebrating and social distancing aren’t easy to do together. We are staying farther apart, keeping gatherings small, and doing things very differently this year.

Even though much has changed we still need to celebrate sometimes. If you are looking for fun socially distanced party games for kids, this post is for you!

It’s easy to get overwhelmed when thinking through all the issues that can come up when trying to social distance and stay safe, but that doesn’t mean you can’t pull off a celebration! Many traditional games and party games can work with social distancing with a little bit of modification. Socially distant games aren’t as difficult to find as you might have expected!

If you have young children participating in your party I recommend these marking off safe distances in your party space. Staying 6 feet apart is hard, and for young kids it can seem nearly impossible to keep them separated. You can use painters tape to mark off their personal space for games, to mark spaces to safely line up, etc. I also love spot markers (or carpet squares) for young kids. They can be moved between games and activities to mark spaces.

Pin the Tail on the Donkey – Simply keep party goers safely spaced while waiting for their turn to pin and this game works well with social distancing. You can even change the theme of the “donkey” to match your party theme!

Simon Says – Everyone can find some personal space and play a round of Simon Says during your socially distanced party.

Bingo – Use a traditional Bingo game set, or print out party themed Bingo cards for a party game all kids enjoy.

Telephone – Modify the Telephone game from the traditional whispers to a more socially distant version.

Have kids stand in a line, socially distanced, all facing one direction looking towards the last person in line.

The second person in the line turns to look at the first person (the rest of the game players cannot see the first two people). The beginning person starts the “telephone” by doing a string of physical movements ending in a clap, for example touch nose, turn around, jump, wink, kick a foot, clap.

At the end of the line, see if the original string of movements makes it to the end!

Artsy Telephone– Another socially distanced friendly version of telephone uses drawings passed along rather than whispers. The first person draws someone on a sheet of paper, the next person copies it and passes only their drawing to the third person, and so on. At the end, see how much the drawing has changed. You can also buy Telestrations, which comes with 1700 words to draw and dry erase boards.

I Spy– Have everyone spread out in the room and play a game of I Spy during your party. This is one of my favorite games to choose when I need to get something else set up for the party, since most kids can play I Spy without any adult direction.

Hot Potato – Use those spot markers to space children in a circle, start some fun party music and pass that Hot Potato until the music stops.

Freeze Dance – Turn on some fun party music and get kids dancing. Randomly stop the music in the middle of the song, anyone who doesn’t stop immediately is out. Keep playing until only one person is left dancing.

Pictionary – This fun drawing game is much like Charades, but instead of acting out a word, kids draw until someone guesses their word. You can buy a version of Pictionary, or make up a list of words and phrases that fit your party theme for children to use.

Musical Chairs– If you have plenty of space to spread out chairs, musical chairs might be a possibility for your party while social distancing.

Headbanz – Play the hilarious and fun Headbanz game at your next party if you have 6 party goers or less. Or make your own Headbands type game using sticky notes or index cards.

Head’s Up App – Much like the Headband game above, except using a device to display the word your friends are trying to get you to say. So much fun! This is a favorite for kids (and adults of all ages!)

20 Questions – In this fun guessing game one person thinks of on object. The other players try to guess the object in less than 20 “yes or no” questions.

Toss – Toss is such an easy game to play while social distancing. Simply space children apart and begin tossing. You can make this game a contest by pairing kids in teams and seeing who can successfully toss the longest, or farthest. You can even start kids 6 feet apart and have them toss, then take one step backwards each time they successfully catch. The winner is the one who makes it tossing the longest and farthest.

So many great variations are available to choose from too, depending on your situation and your guests. If you are indoors choose soft balls, like a koosh ball to toss, or toss balloons.

Speaking of sponge bombs, if it’s warm enough outside to get a little wet, many of these 25 sponge bomb games would work well even with social distancing.

Balloon Bop – Blow up several balloons and have children bop them around the room. There are so many great games you can play with balloons, but the simplest is just bop the ballon around the room and try to keep it from touching the ground. You can turn on some fun music while kids play this game.

Things – One person says something like “Things that you hate to eat”, everyone writes the answer on a slip of paper and the person has to guess who

Charades – You can buy premade Charades cards to make this game have no prep work, or you can create index cards with words or pictures for children to act out during the Charades game. Get really creative and make Charades cards that match your party theme.

The game Guesstures is another great version of Charades that works well for a party.

This is another party game that can easily be made to fit whatever theme you’ve chosen for your party!

Most of the games shared so far could easily be played indoors, however the next section of games really needs outdoor space and decent weather- or a very large open room.

Hula Hoop Contest – Spread kids out with hula hoops and see who can keep their hoop up the longest.

Jump Rope – Similar to the hula hoop contest, hand out jump ropes and see who can keep jumping the longest.

Relay Race – Separate kids into teams and do some relay races. Several traditional relays could easily be used while social distancing. How about a potato sack race? Or have a race with simple directions such as hopping, galloping, or skipping to the finish line.

Obstacle Course – Create an obstacle course for children to race through in your backyard.

Lawn Games – many lawn games are perfect for social distancing!

Several sports will also work well with some modification such as Kick Ball and Volleyball.

Sometimes you still have to celebrate while Social Distancing. These fun social distancing friendly party games will make your party feel a little more normal!